The Table: a common table to share the same emotion

“Freedom is not standing on a tree

It is not even the fly of a fly

Freedom is not a free space

I think it is legitimate to think so. But I can guarantee you that I’m not that kind of man. It is true: I travel alone and occasionally meet some friends, just for company during meals. It may therefore seem that the adjective misanthrope would perfectly describe me. Yet it is not like that. I love sharing: this is one of the reasons I have this blog. We already talked about it: beyond knowledge, I believe that sharing is one of the highest forms of freedom. It allows you to get in touch with others without overriding them. To live the same emotions at a distance of a few meters. The moods and stories of everyone, clearly all different, for a minute, an hour or a week touch each other without really mixing. The game of sets. Concerts as the perfect iconography of this thought.

That’s why I like this place so much. Because this unique table, around which we are all seated waiting for our dishes, will allow us to live a hardly repeatable culinary experience.

I’m in Germany, in Hamburg, at Chef Kevin Fehling‘s The Table restaurant. Let’s say that if I had to draw up a ranking of the cities visited during my road trip, the German one would hardly be in the top ten. Same for the street that hosts the Fehling club: Shanghaiallee. An anonymous street: at the number 15 of a revisable building there is the “three-starred” in which I am about to eat. Kevin Fehling is an enfant prodige of haute cuisine: he turned 40 only in June and yet he can already boast three Michelin’s stars. His curriculum, then, is enviable: he has worked all over the world and alongside the most important chefs before he decided to open his own restaurant,  and started the climb to the Red. Here, if I have to find a fault at The Table I would talk about what surrounds it: the landscape. Unlike the other three-starred, in fact, it is not surrounded by greenery and does not even have a particular view. It’s very normal, actually. Before entering, logically. Because the music changes as soon as you cross the threshold.

A wonderful cherry table is eye-catching: beautiful and impressive, it stretches for almost the length of the restaurant. It allows all the diners (no more than twenty) to eat elbow to elbow, looking at the kitchen: almost 80% is at sight. Fehling‘s brigade, made up of 12 youngsters, works the dishes in front of the customers’ eyes. The amazing machines The Table is equipped with (including an extraordinary suction hood with activated carbon) prevent odours from wandering around the dining room.

There is only one menu, renewed every season, which includes five amuse bouche, seven courses, petite patisserie and coffee. You can either choose the wine or opt for the tasting: a glass for each dish proposed. I do not hesitate and “click” on the second chance. The champagne opens: the Perrier Jouet, one of the restaurant’s sponsors. Then we proceed with a Vouvray Demi-Sec Blanc from 2003, Clos Naudin: a golden-yellow white with honey, apricot, white fig, resin and saffron notes on the nose. On the palate, however, it gives a very long freshness. A Cantocuerdas Moscatel de Bernabeleva of 2015: particular white wine, sweet but moderate. Excellent with cheeses or spicy foods, it has herbaceous and satiny notes. The Cuvée Lais Olivier Pithon of 2015: another white, straw-yellow colour, with hints of white flowers and citrus, makes its point in favour of the minerality. Viré-Clessé 2012: again a white, with very strong buttery and honeyed hues. Long and full-bodied, it gives a powerful and pulpy finish. Chateauneuf-du-Pape “Vieilles Vignes” of 2012: red, with berries and red flowers, on the palate warm and soft, closes on floral and mineral hints. Sweetheart Sauvignon Blanc 2015: very beautiful color, balanced and harmonious, brings to mind memories of white flowers. And finally, Scheurebe Spatlese of 2012: another German white, very fresh, with a ripe fruit flavour.

Let’s move on to the dishes: we start with the amuse bouche. A bloody Mary Macaron: made with tomato juice and gin, it presents a Japanese hamaki in the centre. In fact, Fehling loves to play with various styles of cooking, including the Asian one, which he is very attached to. Even the presentation is crazy: the dish is served on a wooden board that resembles the serpentine of the single table.

Then Mexico: a taco stuffed with cream of avocado, tomato and cheese. It is placed on the table with a cup filled with lobster tartare, pepper, cucumber, dill and iced grapefruit. Excellent froth of cucumbers, white milk, which gives the dish a very good alternating flavour.

We then move on to the Pizza-Bun: a small sandwich with mozzarella and tomato inside, roasted with the flame at the table and the Pulpo with Mojo: an octopus to eat with chopsticks.

Let’s start with the real courses: Organic Goose Liver “Nicoise” with Olives, Melon, Sardines and Paprika. In the style of molecular cooking, this dish looks like something that is not. The two olives (made with cream of green and black olives) instead of the hazel show some foie gras. Spheres of frozen balsamic vinegar, melon, paprika sauce and a sardine jelly complete the dish.

Then the Carabinero: a huge prawn, with fruit chutney, hollandaise sauce and basil sauce. The dish is completed by the chef at the table, who pours a curry foam over the dish. In a separate cup, however, there is the cold part: mozzarella ice cream, cucumber, fennel and crayfish juice.

We continue with the Cod with Spring Maki, Ricecream, Lemon and Eel-Dashi: cod with rice cream, lemon and a Japanese cream. Interesting.

Then the Black Feather Chicken with Cherry, Yuzu, Truffle & Champagne: chicken breast with a cherry reconstructed with white chocolate, black truffle, asparagus, a potato crumble and a champagne sauce.

We close with Venison with Beetroot, Peach-Melba, Sherryvinegar-Hollandaise & Pepper Jus (meat with peach compote, port vinegar sauce, hollandaise sauce and peppers in different shapes) and Asparagus LBE: asparagus juice, asparagus ice cream white, white chocolate, strawberry jelly, almond cream and small pieces of rhubarb. This is a very good dish: the asparagus, in fact, does not give much consistency, while the rhubarb brings all the sweetness of the flow towards the flavour, balancing it.

Time for desserts: an apple sorbet, pistachio cream, gin tonic and milk cream. The sweetness of the sorbet is reasserted by red fruits (which give acidity) while the crunchiness is provided by the cereals: puffed rice and quinoa on all. Finally, the petite patisserie: a cake with fruit, a decomposed macaron, a vanilla sauce, a crunchy almond and milk frothed with a nut in the centre ready to melt.

Before leaving, I decide to have the usual chat with the chef: rarely have I seen a man, a chef in particular, so in love with his job. “I love my daughters – he smiles at me – but this job has given me so much satisfaction that something I owe him back. My wife knows: I have to stay here every day “.

Fehling‘s cuisine convinced me: molecular but simple, also suitable for those who are not very expert. In addition, the common table, the kitchen and the dishes completed before the guests make everything even more beautiful.

Final vote: four beards and a half. 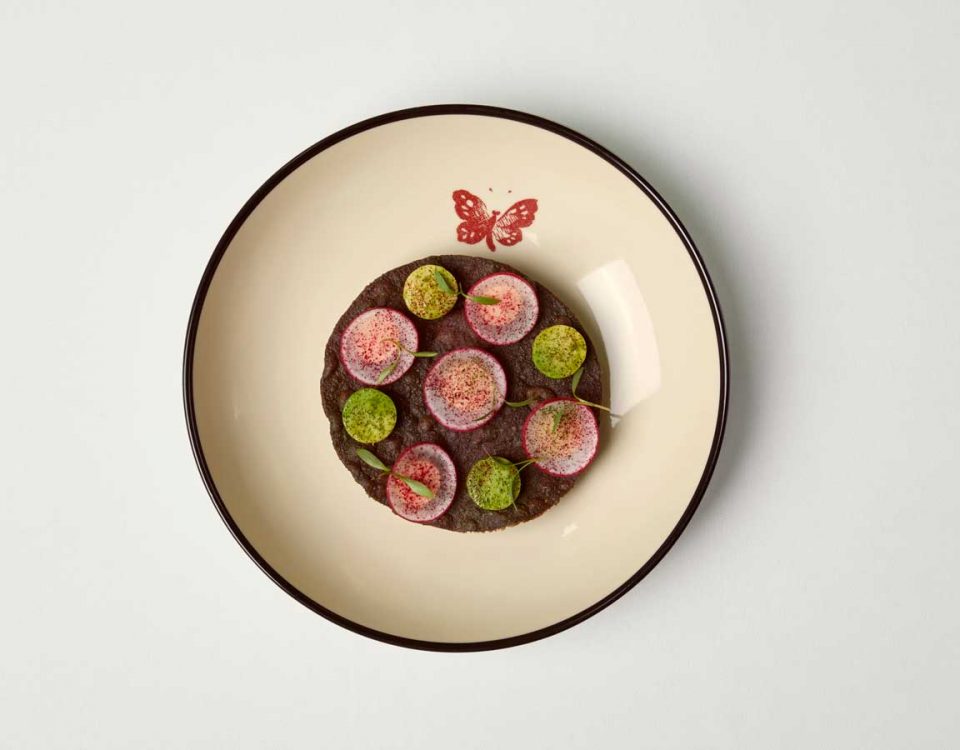